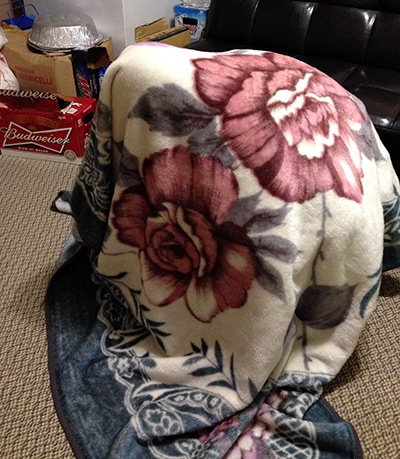 I’m a weekend warrior. Well I workout during the week, mostly at the gym but Boyfriend and I like to explore the outdoors on the weekends… on our bikes! Unfortunately, this weekend was not very adventurous for me because I spent it sick and dying in bed all from an abnormally chilly 6am bike ride to work on Friday to work when my immune system was already in the pits due to lack of sleep. I was feeling fine all day and even made it to the gym for good night of heavy-lifting after 12 hours of work but after that, this was what became of me over the long weekend:

I think Boyfriend’s mom took pity on me and she probably knew I really wanted to ride on Sunday (since we already missed our long Saturday bike ride) so she told me she was going to do “something” to me to make me feel better. I was scared. No lie. And it didn’t help that I don’t speak Vietnamese and she doesn’t speak English so I couldn’t ask for an explanation and Boyfriend was being useless as usual and wouldn’t tell me (proabably because he wanted to laugh at my expense).

So I ended up discovering what a homemade Vietnamese steam bath was! It made me feel refreshed and cleared up my stuffy nose for a bit afterwards but it didn’t cure me because I was supposed to sit under there longer. And I think I was suppose to be naked. It was worse than Bikram because I couldn’t handle the heat in my yoga pants and hair plastered against my skin (hate that feeling) but better than Bikram because it smelled like yummy lemongrass goodness.

BUT you know what? I think it did help because the next day, I felt good enough to hop on my bike …which resulted in this:

But really— the weather was awesome (which would’ve made a perfecttttt day for a ride), I was feeling better and I really believe it’s much better to do something lightly active than lie in bed all day when you are sick. Plus I really wanted to practice clipping in which I’ve barely done at all. All I did was half an hour around the neighbourhood clipping in (and not falling!)… nothing intense. Recovering was much more important!

How was your long weekend / Chinese New Year / BC Family Day?

Why I Workout: Ride & Eat