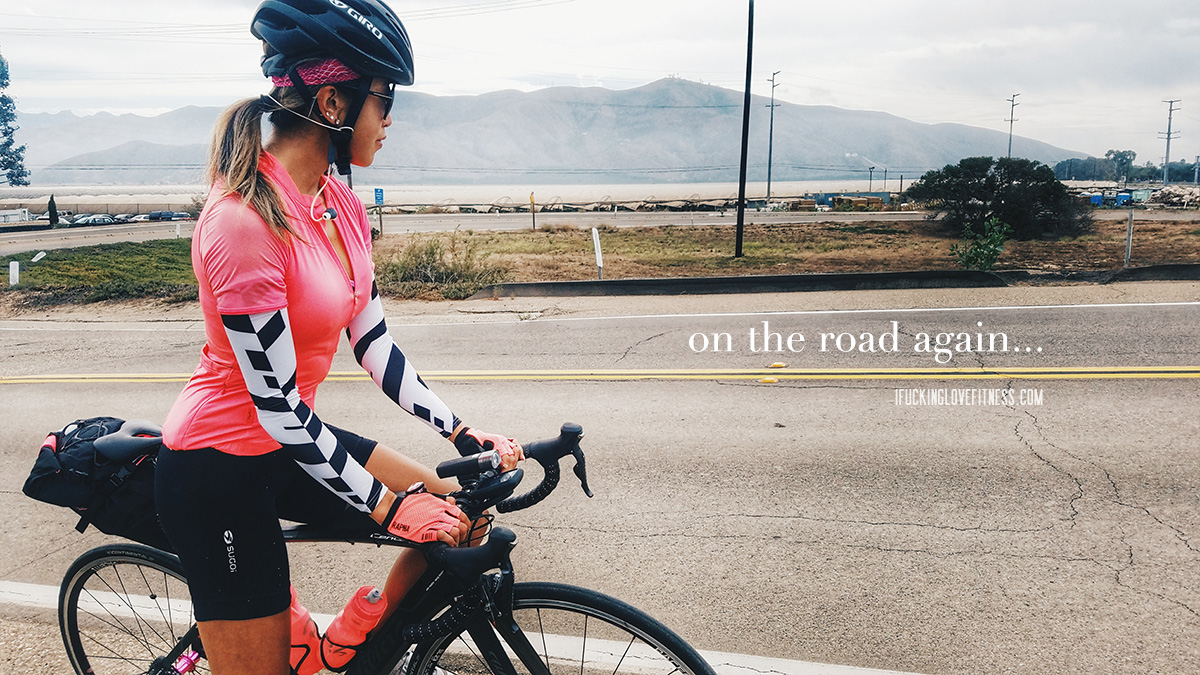 Earlier this week, I rode 100 miles of happiness from West Hollywood to Santa Barbara. It was a ride filled with boisterous rolling hills and luscious scenery in between the Pacific Coast and the rustic beauty of the dry California mountains. We rode along the famed Pacific Coast Highway and then along the busy 101 highway. We passed through quaint California towns, family-owned fruit stands, lots of taco shops, naval bases and RV camps along the beach. 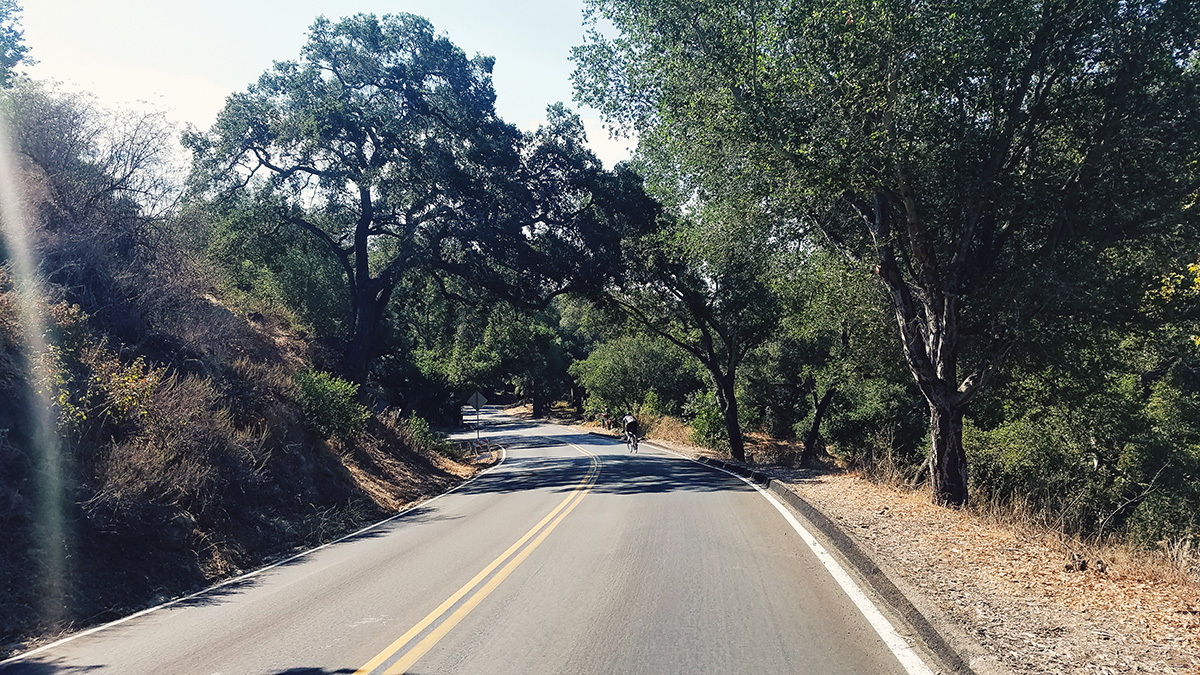 We had the privilege to roll through scenic roads and many isolated bike lanes that was definitely best experienced on two wheels. The weather was cool and overcast… thank God— I didn’t have to worry too much about tanlines… which is a lie because the overcast weather tricks you. I get more defined tanlines when it’s cloudy because I forget to move my bike shorts around! Ugh. Ultimate #cyclistproblems. I feel like I am forever doomed, but that doesn’t mean I will stop riding!

The “Strawberry Stand” right outside of Oxnard which apparently gets a lot of traffic on two wheelz.

The ride itself was seeming easy with only 100 miles (160km) and 650m of elevation but it seemed much harder than my last long ride, which was 265km and 5000m of climbing from Vancouver to Whistler and back just two weeks ago. I think I do much better with rolling hills because I tend to get bored when riding through flats and some not-so-scenic farmland and industrial city parts. But I’m NOT complaining… just sayin’. 😉 I am already planning to do this ride again, twice over. I’m always grateful to be outdoors on two wheels. 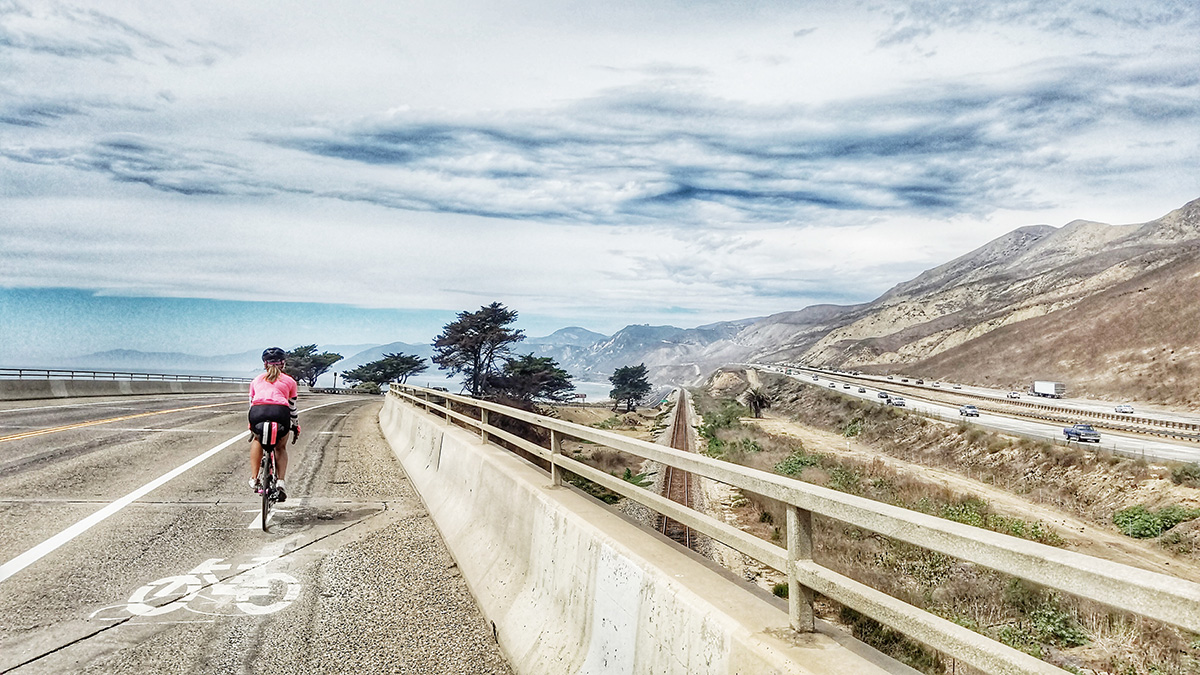 Rolling through a quaint stretch of road with a marked bicycle lane along the busy 101 and the Amtrak line. YOU HAD TO BE THERE. It was breathtaking with all the lines of the roads that we had to stop to snap a few photos.

We stayed overnight in Santa Barbara so I finally had the chance to use my Rapha Apidura saddle bag, ultra-lightweight bike bags, perfect for bicycle touring enthusiasts! I always try to avoid riding with a backpack which can become a drag over long distances, and since I already commit the crime of putting fenders on my beautiful race bike during the wet, winter months… I surely cannot do the pannier debauchery! These beautifully Rapha-branded Apidura touring bags were the perfect solution! 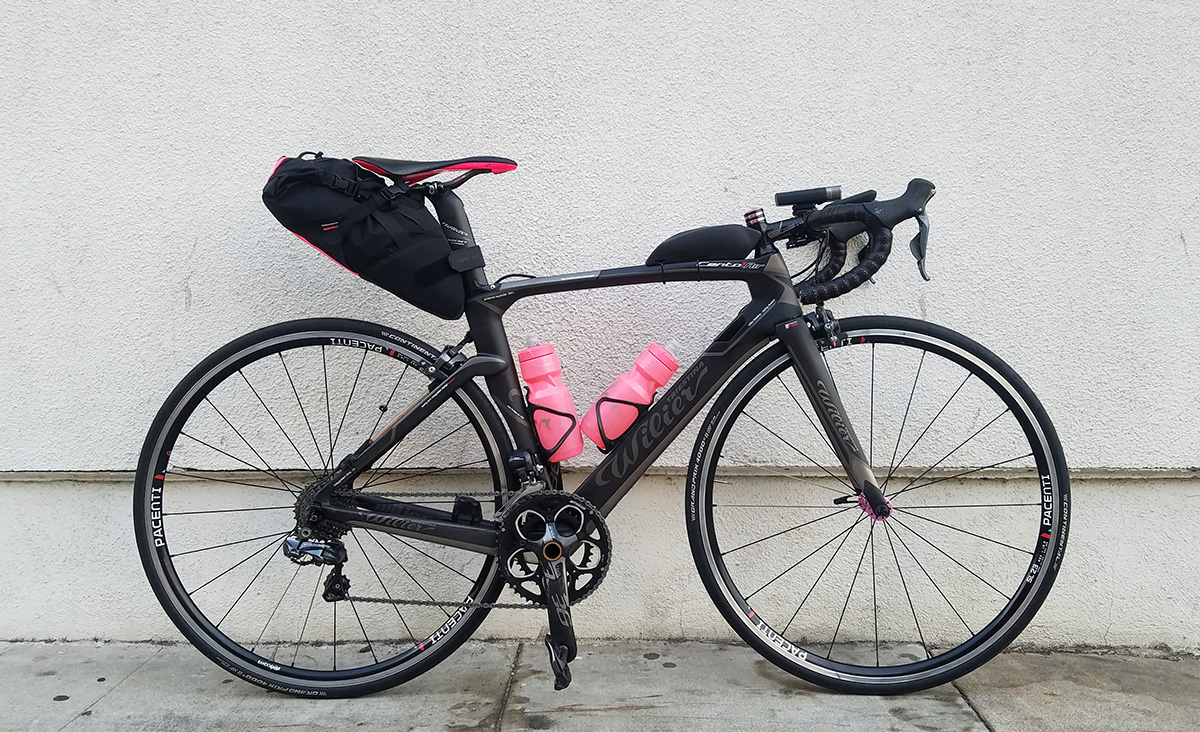 The bags sold out quickly when they were released and me being on vacation, I procrastinated, couldn’t get one and died of sadness for a few days… but I got my hands on a saddle bag not too long after (when you really want something, you make it happen!). I normally travel extremely light on two wheels and don’t cycle tour often but I knew I had to have one… just because these bags are so pretty. And you know, “just in case.” My bag wasn’t packed full but when I came home, it definitely was and I even had to use the pink drawstring backpack that comes with it to get my bike and all my new shopping purchases to the train station but the weight still didn’t bother me.

For this recent overnighter (with a luxurious bed and breakfast stay, of course), I packed and unpacked three times and was quite proud of the final outcome… however, 100 miles later in Santa Barbara, I realized what a big fail it was. Kind of. We rode too leisurely for me to utilize my hotel’s laundry service, so I had to hand wash my gear, and then I even ended up buying a new outfit to wear because I didn’t like what I brought with me (being the vain cyclist that I am). Next, I popped over to Sephora, which was a couple blocks away, to put on a face because I skimped out and didn’t bring all my products… of course, I came out with dozens of new products as well! I don’t think I’ve ever walked out of Sephora empty-handed. Good thing we took the Amtrak back home the next day. 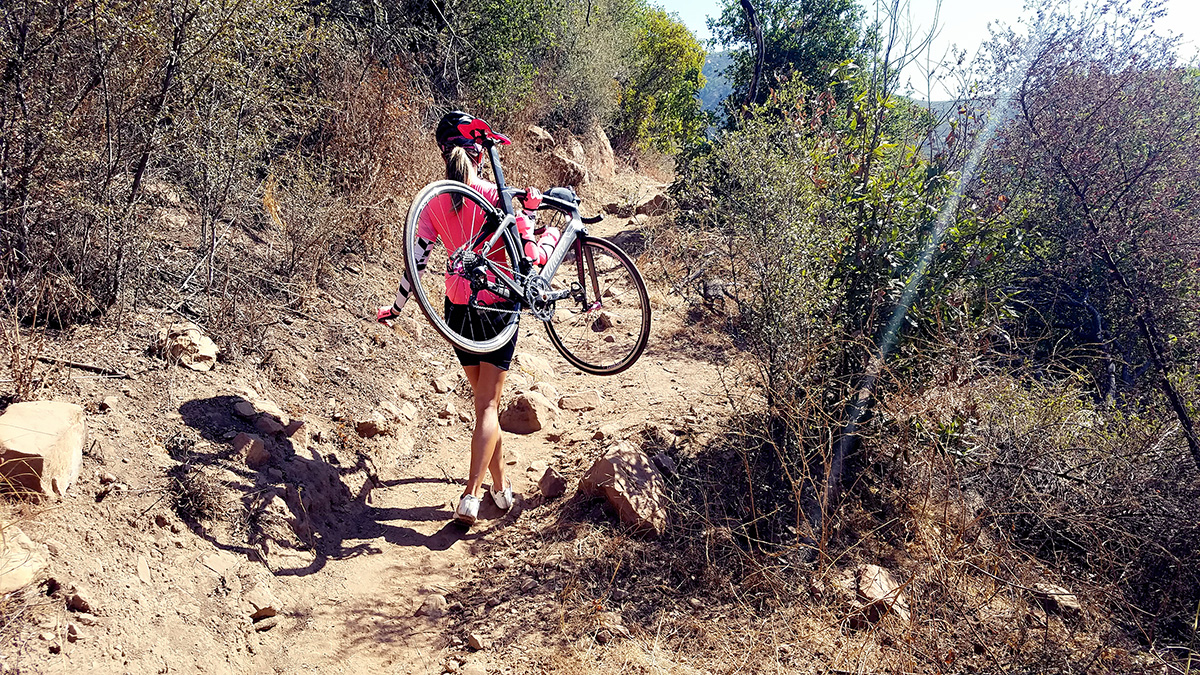 “PRETEND CROSS” // We weren’t on the right bikes for this trail but we got as far as we could before the rock covered trail narrowed and ascended too steeply. Hiking two miles in cleats was not an option… why walk when you can ride?! Craziness. #lazycyclists 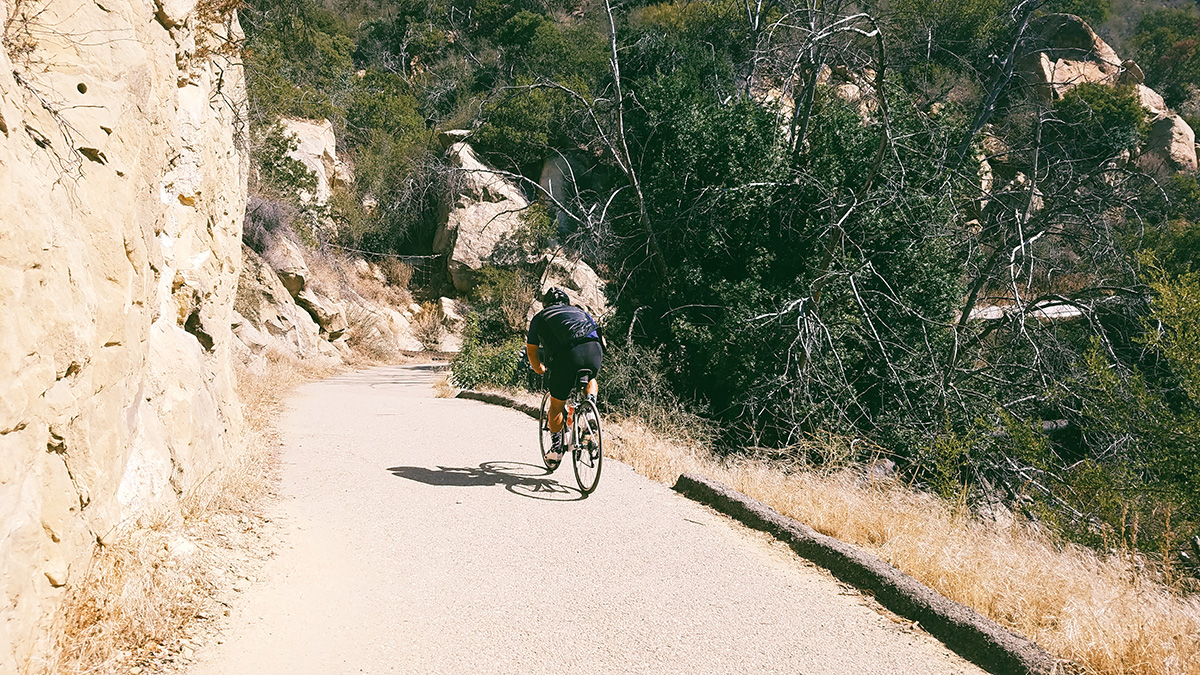 We continued to ride as far as we could to make the most out of this trail because the views were so epic. 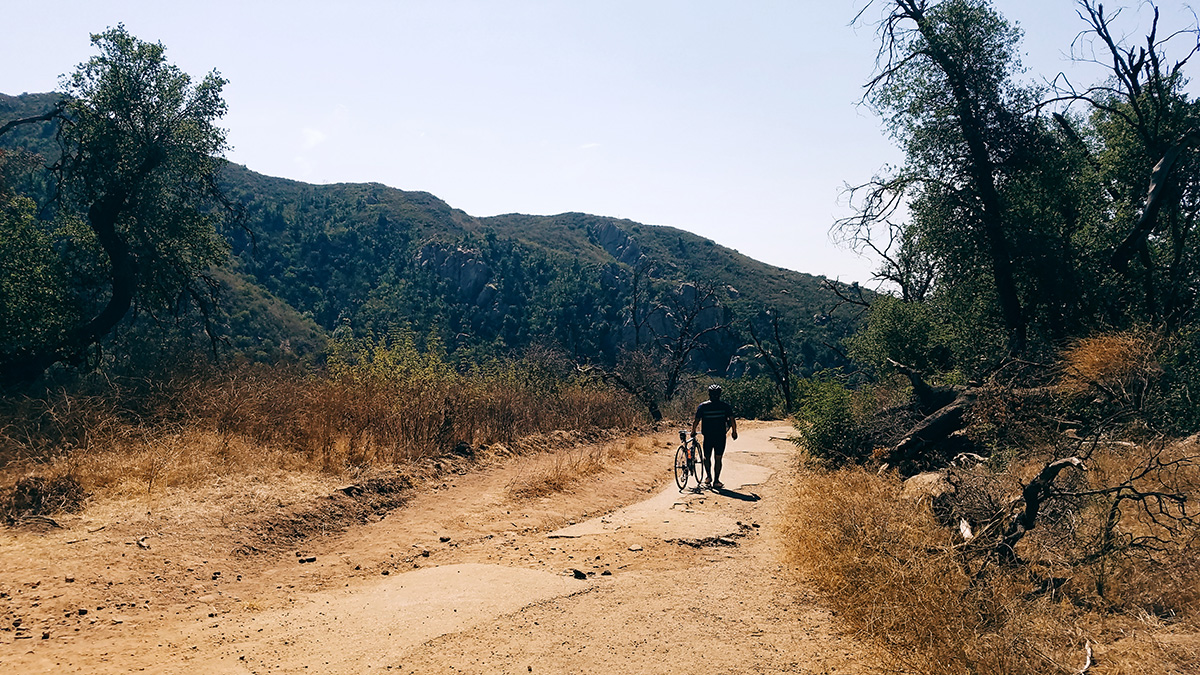 Sometimes we get lazy and walk the bike… #lazycyclists

The next day, we set out with the goals of climbing the iconic Gibraltar but we weren’t paying attention, missed a turn and ended up going up and down random but splendidly rugged and scenic roads and trails up and around Santa Barbara. I couldn’t have asked for more! Sometimes, getting lost is the best thing that can happen. Gibraltar will always be there and missing it gave us an excuse to go back.

Finally, we had to end our ride and I was itching to get back to LA. We caught the 4pm Amtrak so I could make it in time for dinner. See you soon, Santa Barbara… I mean, see you in November! 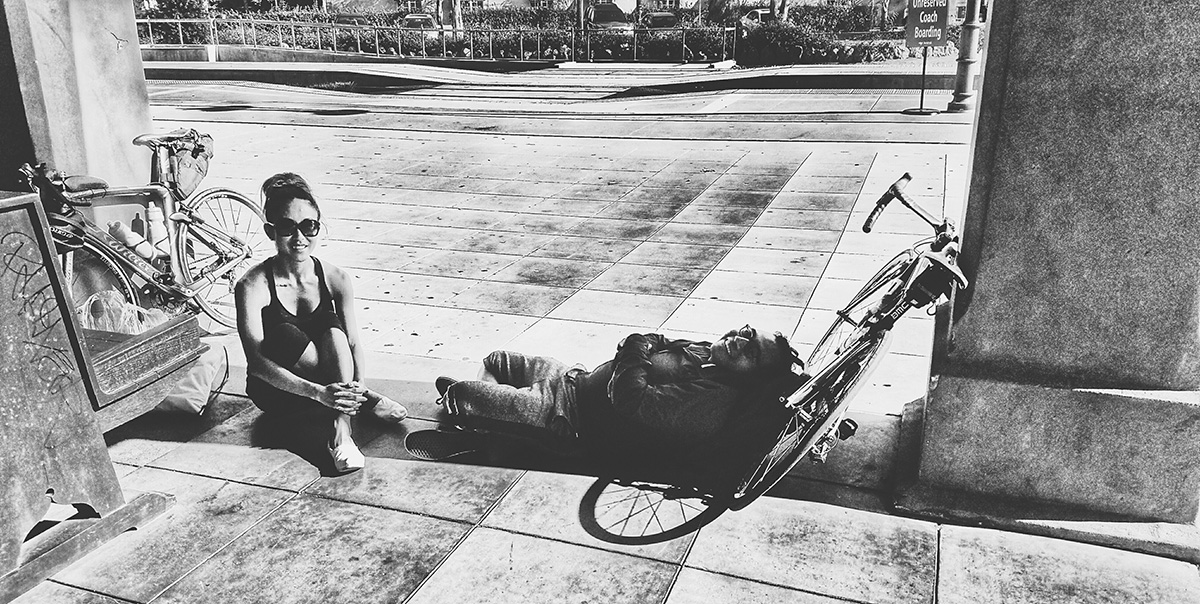 Waiting for our ride home @ the Santa Barbara Amtrak Station 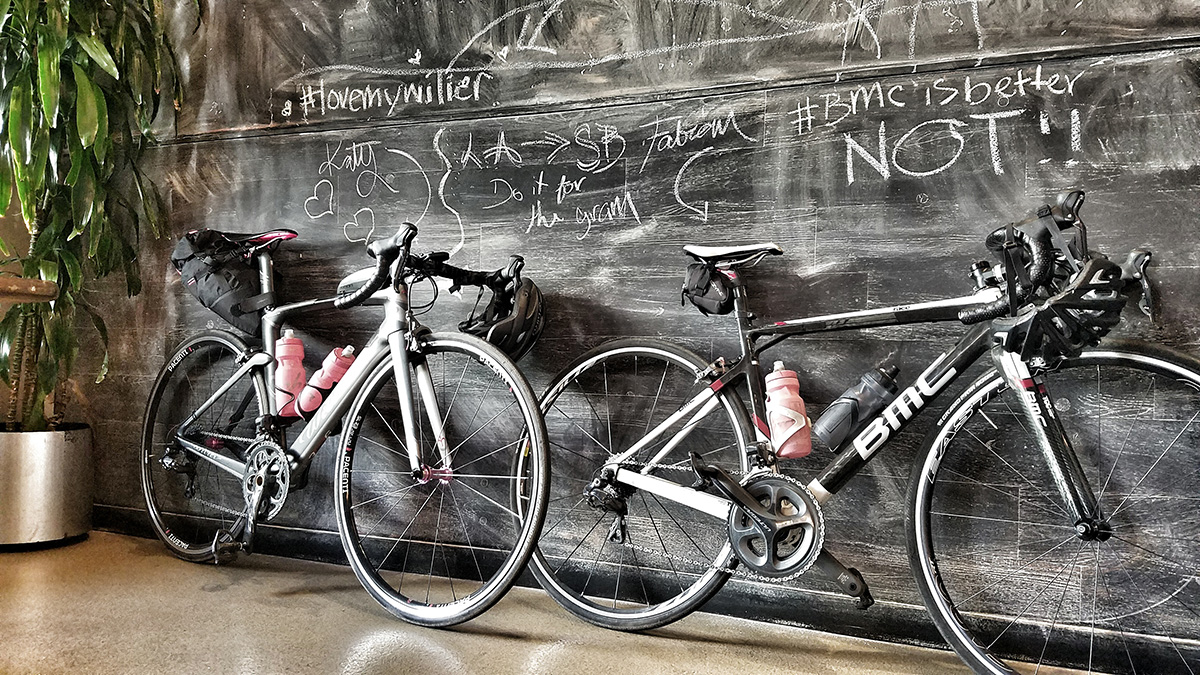 What a great trip! I am really looking forward to ride in Santa Barbara again… I fell in love with the town when I first came here last summer. I knew I had to explore it on two wheels and I’m glad I made it happen! 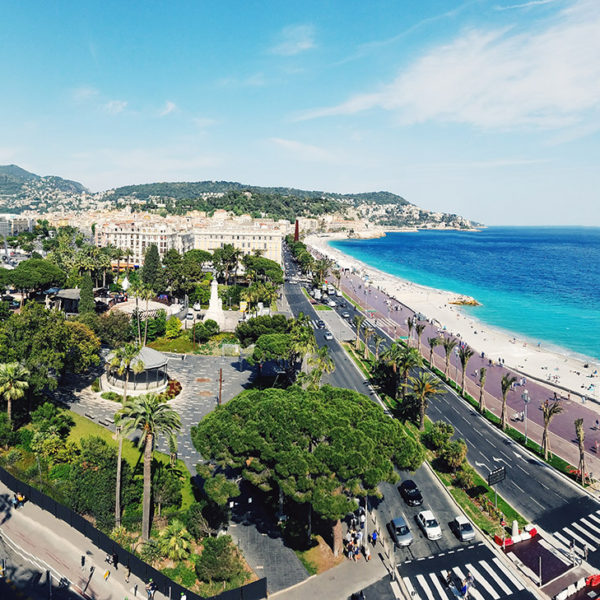 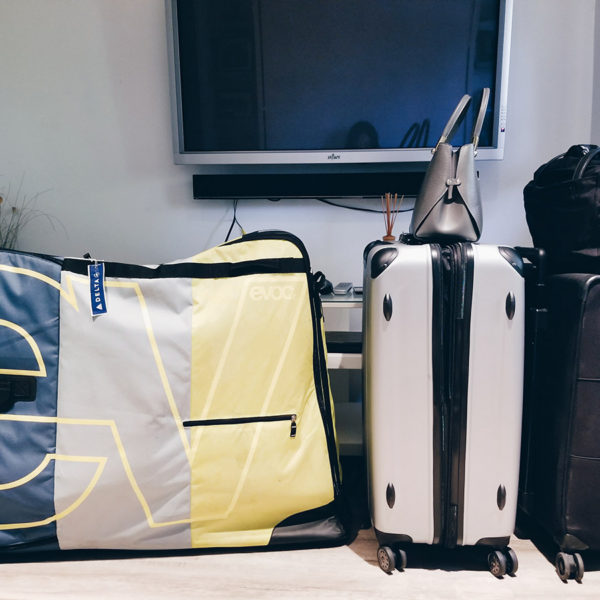 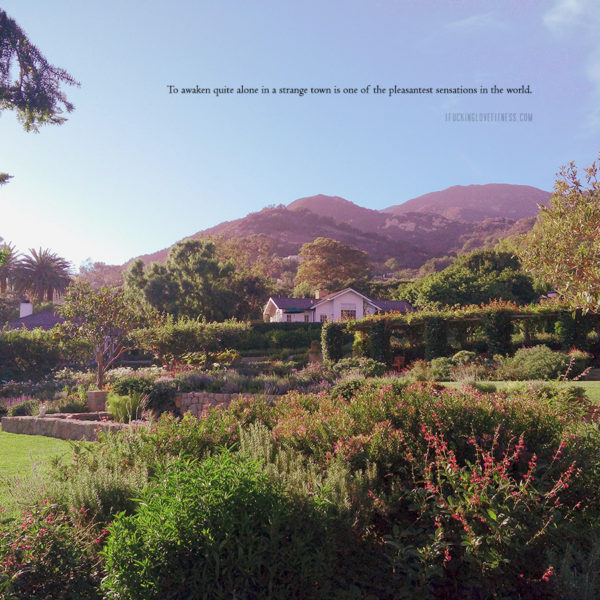 There’s No Rest for the Wicked